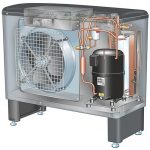 At the end of last week, I was called to an air source heat pump, that had ceased operation.  The obvious failure was a blown fuse on the main PCB.  This fuse was so well blown, that the wire was vaporised perfectly on the inside fuse glass.  This implies that there was serious short somewhere.

The weather was not kind at the time, with snow/sleet showers and 40mph winds would make investigations hard work.  With this short of weather quite common in February here in Westray, it is important that the weather does not get into the electronics or the general electricals of the heat pump.  So this was a standard hindrance that I did not need.

I replaced the 6.3A F fuse and it blew just as badly during the startup sequence of the heat pump.  I phoned the manufacturer and they advised me the fuse protected the fan.  I changed the fuse for a second time, and the failure was identical.  A bit odd for a 50W motor, which should only consume 0.62A.  It was now dark and the weather was looking better for tomorrow.  So I sealed up the heat pump again and left for the evening.

The following morning I inspected the wiring from the PCB through to the motor and there was no damage.  I also routinely check the start capacitor for the motor, and discovered that in this case, it was reading only 2.1μF, instead of 4μF.  Not good, very low, like only 50% of being correct.  That will need replacing.

But the low capacitor should not cause the blowing fuse fault identified earlier.   So the next stage was to remove the fan blades and get the fan motor out.  I took the fan motor back to my workshop, where I have a better range of test equipment to hand.

On testing the motor, the resistance of the four terminated windings appeared to be about right, and insulation tests at 250v and 500v showed no faults to the casing. Next I applied 250v through each of the windings, at a low current.  All the windings were fine, except one.  At 250v is was pretty much a short, but with a multimeter, it was fine.

Not easy, but after a while, it came apart.  And behold, a blackened winding, which matched up with the connected fires where I identified the fault.  Not worth any attempt to fix.

A new motor and start capacitor ordered.  Upon arrival, they were fitted and the heat pump returned to normal operation.

Now you would think that was the end of the story.  But no.  I’m an engineer and I was curious about the failure.  Any normal ‘repair man’ would walk away from that, after presenting the bill.

I believe that the failure was not the motor, but the capacitor.  Why is that then?

The start capacitor provides the phase difference needed by single phase motors by generating a second phase, and effectively generating the torque needed to start the motor rotating in the correct direction.

Although the capacitor was low, it was not dead and should have generated some starting forces in the motor.

However, in Westray, we really do get some serious winds here, for about six months of the year.  And on heat pump fans here, it is not abnormal to see these fans spinning backwards under wind forces, as fast they would go when running forwards under the power of the motor.  So if the wind direction is such, that when the heat pump starts the fan, the forces in reversing such a wind induced situation, are quite complex.

So these two issues, the wind and the low capacitor, probably caused some quite serious abnormal currents in the winding.  And until the motor was spinning the fan in the correct direction, there would have been huge currents in the start windings.

So with a low start capacitor and strong winds, the fan motor would have had serious issues in turning in the right direction.  And thus burnt out the start winding.

I have no idea when the failure in the capacitor started.  The heat pump is about 7 years old.  The capacitor may have been faulty when it was built by the manufacturer.  It is unlikely that it was tested before final assembly.  But it could have quite easy failed during its operational life.  We will probably never know.

But if I had not checked the start capacitor, the motor would probably have failed again.  So as long as the capacitor remains good, I can’t see that the motor failing for the same reason again.

So the probable root failure of a £200 fan motor, was caused by the failure of a £5 capacitor.  Plus the loss of heating for just over a week (it takes a week for spare parts to get here).

A happy customer and the curiosity of an engineer fully satisfied.