The MkI version worked well with just mechanical switches.  Producing a valve which can be set and held in any position of its normal rotational path.  This now allows me to produce a CT (Constant Temperature) valve and control unit for well under £100.  A significant saving on current units,which sell for several hundred pounds.

Using a standard 3 port diverter valve (not a 3 port mid-position), and my control module, it is possible to use this valve as a standard proportional valve.  Settable to any one of around 30 steps through the normal 90° operational arc of the valve.

No modifications are required to the valve in anyway, allowing standard commercial-of-the-shelf (CoTS) 3 port diverter valve to be installed.  This allows any plumber to fit/replace the unit without needing any additional skills.  The functionality is provided via the micro-controller within the control box itself.

These diverter valves are available for around £50 to £80 (depending on the connection size and make).  With the prototype CT control box costing around £25 or so (I’m still working on the prototype costs as I write).  Productionisation should reduce this cost.

The MkII prototype with the micro-controller and Omron solid state relays (SSR) failed to operate correctly.  This was down to the built-in zero-crossing and snubber networks of the SSRs.  Although the motor would ‘step’ forward, reverse ‘steps’ would always return to the start position. 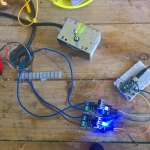 The MkIII using SSRs that don’t contain snubber networks function perfectly.  Providing around 30 steps over the 90° operational arc.  That equates to to about 3° per step, both backwards and forwards.  The MkIII on the bench is shown to the right.

I am now focusing my efforts on the control software for the CT system.  I have on order, the parts needed for the MkIV.  Which will use pure discretes ad semiconductors.  The MkIII was built around CoTS modules, which are far too large to be used as a production design, however is perfectly suitable for ‘bench’ testing.

I am hoping to have a fully working MkIV unit ready for the end of the year and the final prototype MkV ready early next year.  These will include TTH PCBs and a suitable case.  The whole project will be available (hardware and software) under Open Source licenses later next year.

CT blending systems should significantly improve the performance (reduced energy consumption) of boilers and heat pumps connected through to hydronic emitters (radiators, etc.). This can be installed to new and existing systems in a few hours.  The design allows for deactivation due to failure or unsatisfactory operation, requiring little more than turning the CT system off and the connected heating system should return to normal (without CT control) operation.